PERSHIMEX INTERCEPTS 7 G / T GOLD OVER 10.1 METERS BELOW THE SURFACE PILLAR OF THE FORMER PERSHING-MANITOU MINE

Val d’Or, Quebec, May 18, 2021: Pershimex Resources Corporation (“Pershimex” or the “Company”) (TSX VENTURE: PRO) is pleased to announce the first results of the drilling campaign carried out in the spring of 2021. The primary objective of this campaign was to confirm the continuity at depth of the mineralized zones contained in the surface pillar of the former Pershing-Manitou mine.

A total of 12 holes were drilled for a total of 1,879 meters. Hole PM-21-03 intersected 7 g / t gold over 10.1 meters in a significant mineralized envelope grading 3.07 g / t gold over 25.4 meters. Hole PM-21-02 returned 1.59 g / t over 4.9 meters in a mineralized envelope grading 0.5 g / t gold over 28.3 meters. Holes PM-21-02 and PM-21-03 confirm a trend generally observed in the Abitibi gold deposits, namely an increase in depth in the gold grade and an increase in depth in the thickness of the zones mineralized.   These holes were drilled on the same drilling site but with a different dip (- 63 and -73). They aimed to confirm the presence of gold mineralization at depth under the surface pillar of the former Pershing-Manitou mine (below 100 meters). Drill hole PM-21-02, from 145 to 175 meters deep, intersected an important mineralized section containing quartz veins and veinlets with a small amount of pyrite and only a few small spots of native gold. Exactly under this hole but at -73 degrees dip, hole PM-21-03 intersected the same mineralized envelope, but in a more intense way, with an increase in quartz veins and veinlets, as well as a marked increase in the pyrite content combined with an increase in the number of native gold grains.

The first hole (PM-21-01) deviated sharply and was stopped. Despite the fact that it has almost exclusively intersected lithologies generally less favorable to the presence of gold mineralization (mafic volcanic), gold values were intercepted: 1.88 g / t gold over 1.4 meters. This is the first significant gold intersection at west of the old mine shaft and may correspond to the western extension of one of the mineralized structures.

Robert Gagnon, President and Chief Executive Officer of the Company, declares: We have confirmed with holes PM-21-02 and PM-21-03 the continuity of mineralization at depth under the surface pillar of the old mine Pershing-Manitou. In addition, there is clearly an increase in gold grades and the importance of mineralized envelopes at depth. Note that these holes will be included in the current resource calculation and will significantly increase the gold potential at depth of the old mine. In this sense, we wish to announce that Pershimex wants to be the first in Quebec to take advantage of the new amendment to article 69 of the Mining Act, which since March 2021, authorizes exploration companies to carry out bulk sampling not exceeding 5,000 tons.

This press release was prepared by Robert Gagnon, a professional geologist and President of Pershimex, a qualified person under Regulation 43-101. Following an analytical quality assurance and control program, white samples and certified reference materials were added to the NQ-caliber half-carrot samples before being shipped and analyzed by the ALS CHEMEX laboratory in Val d’Or, Quebec using the pyro-analysis method. 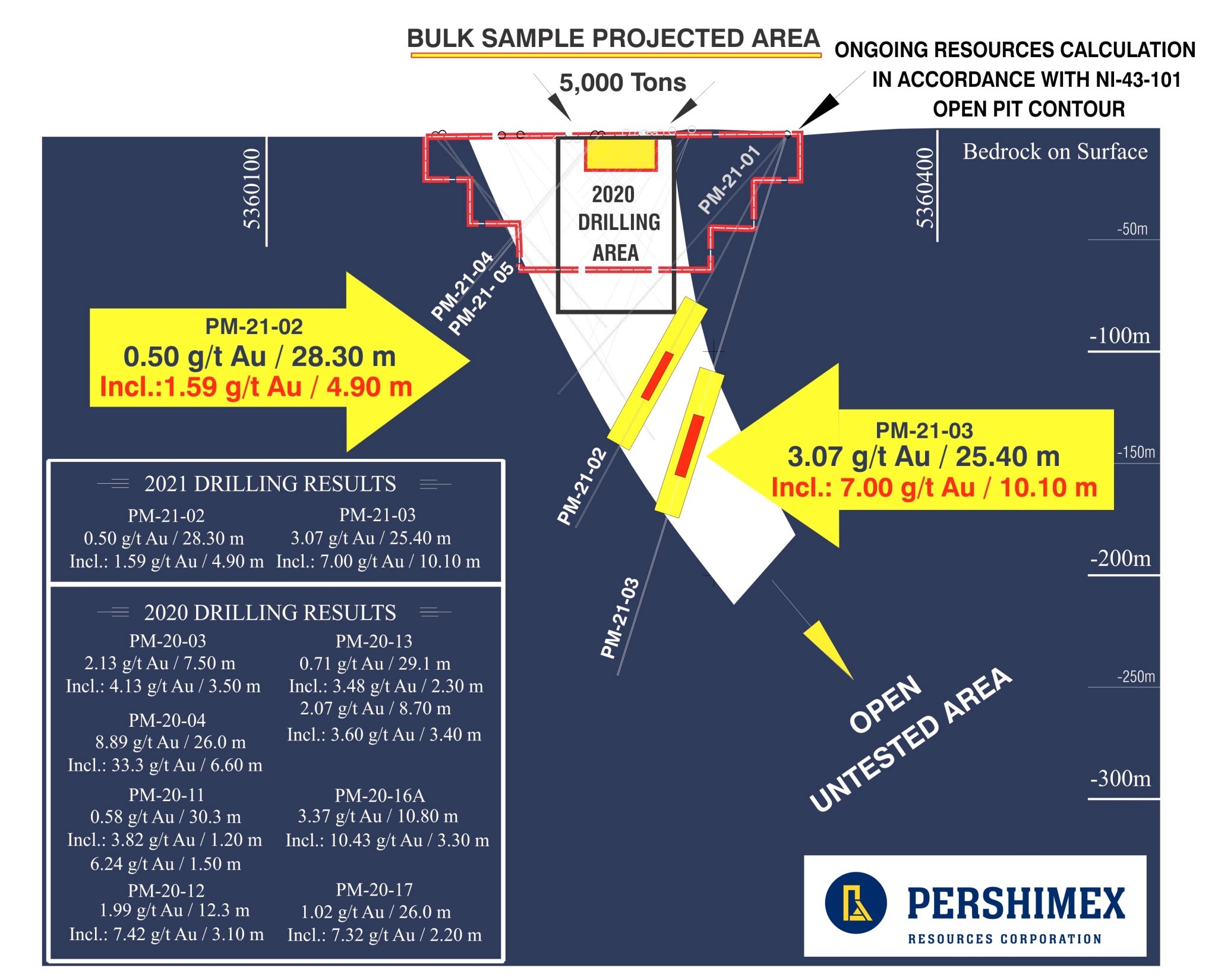