PERSHIMEX ANNOUNCES THE SIGNING OF A LETTER OF INTENT FOR THE CUSTOM MILLING OF THE BULK SAMPLE OF 5,000 TONS FROM THE PERSHING-MANITOU SITE WITH THE SLEEPING GIANT MILL OF ABCOURT MINES INC.

PERSHIMEX ANNOUNCES THE SIGNING OF A LETTER OF INTENT FOR THE CUSTOM MILLING OF THE BULK SAMPLE OF 5,000 TONS FROM THE PERSHING-MANITOU SITE WITH THE SLEEPING GIANT MILL OF ABCOURT MINES INC.

Val-d’Or, Québec, February 8th, 2022: Pershimex Resource Corporation (« Pershimex » or the « Company ») (TSX VENTURE: PRO) is pleased to announce the signing of a letter of intent (signed on January 28th 2022) for the custom milling of the bulk sample of 5,000 tons from the Pershing-Manitou site, Courville property, with the Sleeping Giant mill owned by Abcourt Mines Inc..  This letter of intent was the last document required to finalize applications for bulk sampling and site restoration authorization from the government. The bulk sampling request involves the extraction of 5,000 tons of mineralized material from the surface crown pillar of the former Pershing-Manitou gold mine.  This volume of material will be taken from the volume previously defined by the recent Mineral Resource Estimate (MRE).

Indeed, the MRE report filed on SEDAR on January 24, 2022 (NI 43-101 Technical Report and Mineral Resources Estimate for the Pershing-Manitou Project, Abitibi, Quebec, K. Williamson, 3DGeo Solution Inc.) confirms the presence of 9,200 tons grading at 7.2 g/t Au, for a total of 2,100 ounces of gold in the measured category.  To define this category of resources, Pershimex invested less than $1 million on the field and completed approximately 3,000 meters of drilling.

The extraction of the bulk will allow Pershimex to confirm its exploration model while generating a possible profit on this operation. The technical data collected will be used to maximize future development work and thus increase the value of each ounce of gold at the Pershing-Manitou deposit. 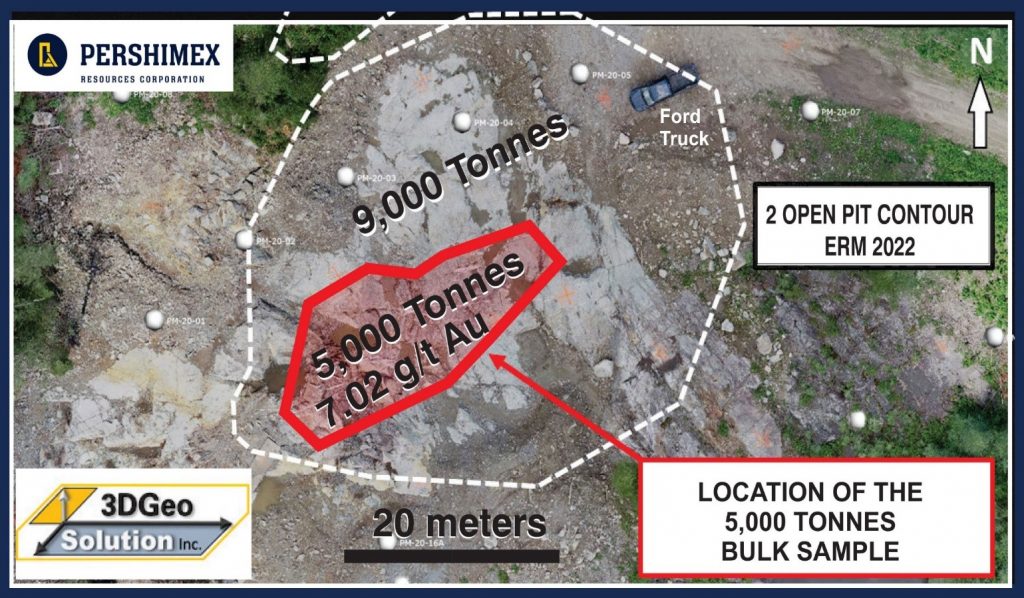 Robert Gagnon, President and Chief Executive Officer of the Company, declares: ” The signing of this letter of intent for custom milling with Abcourt Mines Inc., is the culmination of more than 3 years of sustained efforts, which started with the discovery of some native gold flakes in a pile of 2,000 tons of material deemed sterile. The pile covered all of the mineralization contained in the surface crown pillar of the former Pershing-Manitou gold mine. It had to be removed and processed in a milling plant in the region in order to be able, to see the extent of the mineralized system exposed on the surface.

This press release was prepared by Robert Gagnon, Professional Geologist, and President of Pershimex, a “Qualified Person” under NI 43-101.